Visitors to General Motors’ “Futurama” exhibit at the 1939 New York World’s Fair were given a glimpse into the future, and a souvenir pin to flaunt their newfound insight.

The exhibit was the largest at the fair, spanning seven acres.  Consisting of four structures, it was made to look how they envisioned an urban intersection in 1960.  Guests could ride a “carry-go-round” (moving chairs with audio narration) that took them all over the exhibit’s 35,738 square foot diorama, which included over 50,000 operational, scale-model automobiles.

The future of transportation?

GM hoped that their exhibit would urge people to support technological and scientific research while moving towards the “World of Tomorrow.”  They also wanted to show the significant role of automobiles in this future society (“World’s Fair: Enter the World of Tomorrow,” Biblion, New York Public Library, http://exhibitions.nypl.org/biblion/worldsfair).

Countries’ participation took on new significance with the outbreak of WWII

This pin’s accession record provides little information about its origin, only that it was found in the collection.  In my quest to learn more, I came across a photo album dedicated entirely to the World Fair (1997.8.1). 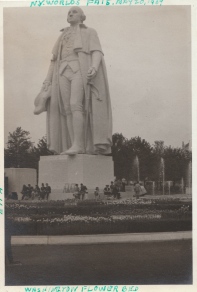 Fair organizers chose April 30, 1939 as the opening day, as it marked the 150th anniversary of George Washington’s inauguration

The two symbols of the World’s Fair, Trylon and Perisphere, were connected by the world’s longest escalator at the time

Donated by John and Patricia MacEnroe, the photographs were taken by John’s father, John Waldron MacEnroe.  He was a clerk for the Commissioner of Jurors in Queens and an attendant of the court.  A New York City resident, he was able to document the Fair for its yearlong duration, and  his pictures are a great way to see what it looked like from a regular person’s point of view.  There were so many pictures to choose from, it was hard to pick just a few to include!

A multi-use object used for baking (women’s work) and drying hops (I presumed for brewing, which I also presumed was men’s work).  Sounds mysterious.  I like it.

Even better, when I found this information in the accession paperwork:

“Articles listed below were from the home of my late Great Grandmother, Abigail Pierce Rowell, who was born on August 11, 1826, in the village of Waterville, Oneida County, New York, and who was married to Solomon Woolworth on November 15, 1846.  Abigail Pierce Rowell Woolworth died at Waterville, New York on April 22, 1863.  Solomon Woolworth was born in Jefferson County, State of New York in 1822 and was lost in the Chicago Fire in the year 1871.”

Waterville, NY.  Made me think of this print, hanging in our lobby: 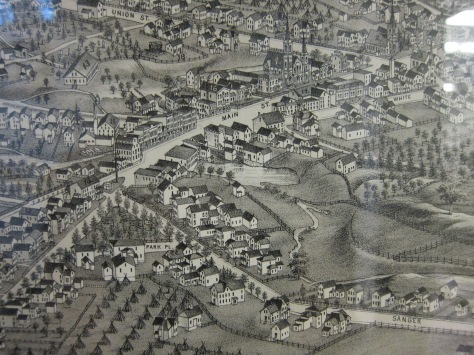 No, those aren’t Tipis

Historically (and continuing today), the hop industry thrived in Waterville.  Maybe Solomon was a hop farmer.

But history isn’t often so tidy or simple.  Census and city directory listings suggest Solomon and Abigail and their two children moved from Waterville to Paris Hill in 1846-1847, Deerfield in 1850, and Utica 1853-1855.  By 1860, Abigail is living in the town of Paris without Solomon.  The Utica City Directories list Solomon as a harness maker and he became involved with a lawsuit in 1850 (Oneida Morning Herald, 1850).  Why isn’t Solomon listed with Abigail in 1860?  And why was Solomon in Chicago in 1871 for the great fire?  And if the sifter was from Abigail’s home and it was used for hops, whose hops was she sifting?

I talked this over with a volunteer, and we think it looks more like an agricultural implement than a kitchen flour sifter.  What do you think?

Miniature advertising jugs such as this were a marketing tool similar to the freebie key-chains, pens, and magnets filling the modern day “junk drawer.”  They were also sometimes used as a small sampler of the product they were advertising.

However, what’s most interesting about this jug in particular is the tiny inscription scrawled across the front. You can just make out the name “Clara Hoerlein,” revealing a deeper significance beyond its appearance as an advertisement for “C.J. ORTMANN’S STRAIGHT GOODS.”

“Few Germans of the Mohawk valley were better known” than C. J. Ortmann

Carl “Charley” J. Ortmann was born in Thuringia in 1828.  He served in the Prussian infantry during the 1848 Revolutions before moving to America in 1855, eventually settling in Utica in 1862.  Here, he owned a German restaurant on Lafayette Street and was engaged in multiple other business endeavors, including the import of Hungarian and German wines.  (Obituaries of Carl J. Ortmann, Ortman Family Name File, O.C.H.S.) 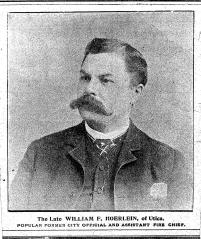 Along with their liquor business, Hoerlein and Ortmann also operated the Utica Coal Company

William and Mary’s daughter, Clara Hoerlein, adds her name to the family business by writing it on this jug: inserting herself into the company of her father, grandfather, and uncle.  In the collection I found a couple other jugs printed with “Ortmann & Hoerlein,” but Clara’s unique, handcrafted version shows the more personal side to this family business. 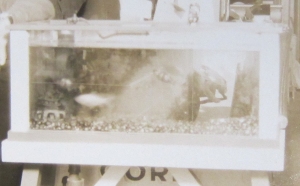 In 1856, a man committed to those specks that grow into our beautiful flowers and food established the Daniel Batchelor Seed Store on the corner of Liberty St. and Hotel St. in Utica. During its long tenure, the business moved to Pearl St. and eventually returned to its original building. After Daniel Batchelor passed away, the business remained in the family for generations. The Batchelors sold seeds and also cage birds, fish, and supplies for small pets.

Boxes of Ball jars held jars of honey from a beekeeper, M. Schuyler

Noteworthy not only because of their commitment to quality, family, and furless pets, the Daniel Batchelor Seed Store proudly acknowledged their prize-winning past. At the 1893 World’s Fair, Seed Store founder Daniel Batchelor won a medal and diploma for the “finest display and exhibit of CLOVER and GRASSES.” 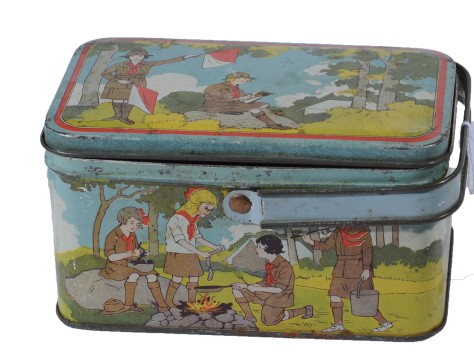 Like many of its brothers and sisters in the OCHS collection, the lunch box and its documentation provide few clues about its past.  It was donated by Frank Spinelli, a World War II veteran, in 1998.

The images decorating the sides and top of the box depict a group of girls around a campfire.  Perhaps the box’s owner was a young Girl Scout and carrying the lunchbox to school was a point of pride. 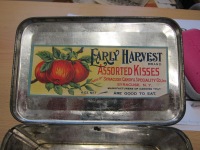 On the inside cover is a sticker that reads:

It’s possible that the sticker was added later, but it may be more likely that the lunch box originally housed candies.  The box became a souvenir from a little girl’s trip to Syracuse.

Object: Photograph
Description: Photograph of the Busy Corner in Utica around 1900 with men marching in a parade carrying white umbrellas.
Date: 1890-1906

This week’s blog is about a mystery and a discovery.

The mystery: Our volunteer and webmaster discovered a fabulous picture of the Busy Corner in Utica around 1900 that featured a parade with men carrying what appear to be white umbrellas.  The detailed and clear photograph shows onlookers on the street and hanging out windows, walking, and riding bikes, wagons, and trolleys.  Every flat space available is covered in advertisements and Fraser’s department store (before the fire)  is decorated with American flags.  Why are the men carrying white umbrellas? 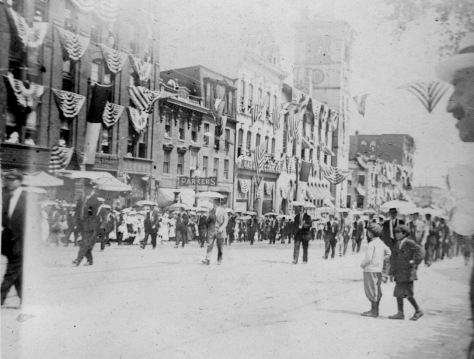 The discovery, part 1: During Old Home Week research, I found a picture of men carrying umbrellas in the Civic Day Parade.  Luckily, this one was labeled, “Sheet Metal Workers.”

Tin Umbrellas and a Tin Man

The discovery, part 2: Another photograph, this one a 1967 newspaper clipping from a scrapbook, finally completed the mystery.  The men with umbrellas were from the Sheet Metal Workers Union.  Further research indicates their “novel” umbrellas were made of tin and the union member at the lead dressed in a suit of armor made of tin!  What a sight to see!  Does anyone have one of those umbrellas?

“The sharp sunlight reflected on the bright tin shot blinding glints of light into the eyes of spectators who happened to be above the street level.” (Utica Herald-Dispatch, Wed., August 5, 1914)